Heather Bennett and husband, Michael, brought an entire quilt show to Swindon station. They were not able to come to the platform so had to do their train-by from the station's car park. Because the train was pulling away from the station, I kept the camera on wide angle so I wouldn't miss them. It was fairly dreary, but we managed to get the shot.

Heather says:
I went to check the emails one morning and oh boy, guess what?! There was an email saying Ricky Tims was coming to England. Not only was he coming to England but he was going to try and do some drive-by quiltings via train during his holiday.

I did a quick dash upstairs to my long suffering DH. “Guess what, guess what? He’s coming to England and doing drive-bys!” My excitement was met with muffled replies...well, in all fairness it was early and he hadn’t had his cup of tea yet. I persisted. ”I’ve got to do this, I’ve got to have a go and the Swindon railway car park it is.” I emailed Ricky so he would be on the lookout for us in Swindon.

My next contact was my equally long suffering very dear quilting friend Emma, who after some explanations (she is used to me and my sometimes slightly hair brained escapades, thank goodness. Every quilter should have a friend like her) agreed to have a go herself. Great I thought, how fantastic if we can both pull this off.

The quilts were chosen, venue decided upon, and train times checked. Oh, thank goodness, we have enough time after patchwork class to get to Swindon and get in place. Now, getting into Swindon was the easy bit, finding a car park, not so easy. Dear husband kept his cool (time was ticking by just a bit too fast) and had it all under control. He managed to get me and the quilts in place. We were positioned such that the photo would happen as the train pulled away from the station.

Then along came two workmen.......I can’t start to imagine what those two burly maintenance men must have thought we were doing but whatever they were thinking, it made them smile.

They had announced the arrival of Ricky’s train. He is here. My DH and I wait with bated breath. Will it work, will it work? Then the train pulls away from the platform and the right carriage is along side us. We held up the quilts as the train passed by! Did it happen, did it work?

We breathe again and grin the biggest grins ever!

The quilts were wrapped up and we made our way back to the car intent on getting a cup of tea (well, we are English, mostly) and a hot chocolate to celebrate. I was so pleased that Michael (DH) could take part as well. He works quite hard helping me in class so it was only right that he should have some of the fun too.

About the quilts:
The lovely attic window wall hanging was made by Michael (DH). The blocks feature sea scenes and lighthouses, sea shell buttons, and wooden seagulls.

The next quilt (stained glass rose) is Michael's version of a Rennie Mackintosh design. A lot of time went into getting the colors just right and making the stitching invisible.

The nine-patch is “Luke’s frog quilt” Luke loves frogs - from a distance - and I agree with him on that!

The largest quilt in the center of the photo started life as a storybook. Folks who know me, know I like to do “textile rescues” and the storybook was most certainly a “rescue”. It was sad, grubby and forlorn when I found it in a charity shop when it “spoke “ to me. Such fun was had in the making of this happy little rescued quilt.

The little pink and yellow cot quilt came together so easily. The squares have a feature print which made choosing the sashing very easy. It is used as a sample for my first time quilters and they love to see their versions come to life in a fairly short amount of time.

The "Welcome" hanging?  Just had to show that one, didn’t I?  Welcome to England Ricky!

The heart suspended below the Welcome is known as Emmy’s heart. Emmy was a cat that adopted us many years ago and came to be my much loved furry quilting buddy.

The teddy bear is another rescue. I found him looking all sad and lost at the back of a shelf in the American museum at Claverton in Bath. At every meet and greet I have done over the years, he stands there proudly clutching his quilt and making friends with folks from all over the world. As this was another “show and tell” he just had to be there too. 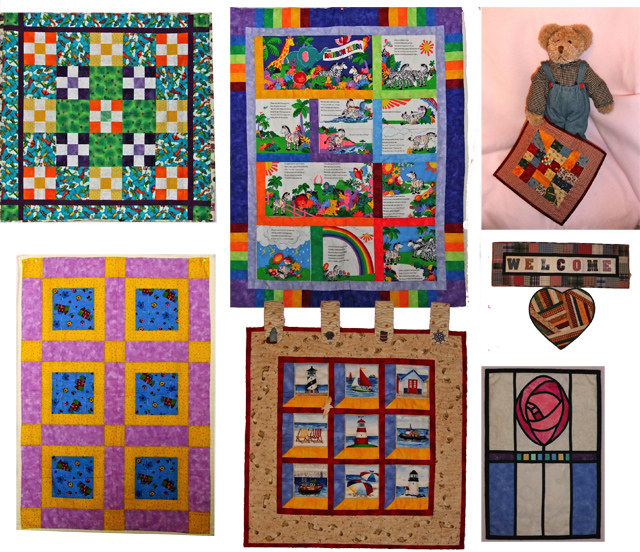