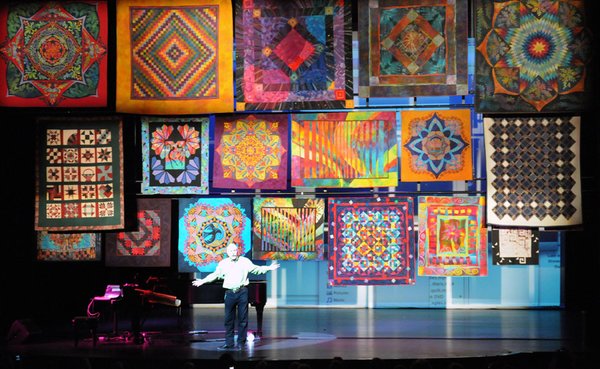 An enthusiastic audience of the Whoo-hoo Nation gathered at the Carson Center for my 2010 concert at the AQS show in Paducah, KY. Instead of riding in on a motorcycle (2008) or rising up from the orchestra pit with a tiny red toy piano (2009), I couldn't think of a clever way to start the show. So instead, I decide to surprise the audience with a visual treat mid-way through the concert.

After playing The Way Home accompanied by a music video featuring dozens of my quilts, the real quilts came floating down to create a massive backdrop while I shared some of my early quilting experiences. I have to admit, when I went saw the array during rehearsal I was stunned. I've never seen my quilts displayed in such a way and when I look at the photo I still go - wow!

I'm thankful to AQS for making this amazing event happen and I'm thrilled that each year the hall is filled to overflowing with such an appreciative audience.