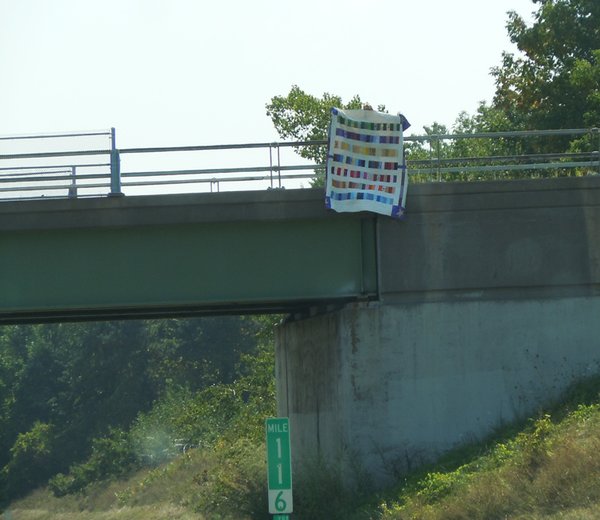 Kate Berggren Lasher from Albany managed to make it to an overpass on I90. She even went early and scouted out the location so she could send me a message with the exact details.

In the photo below I am with Dirk..our golden retriever, who helped me scout out the Drive-By location. I was opening up The Quilt Show, like I do every Tuesday and there was a message and a picture about "Drive-By" Quilting. "Good morning Buffalo", Ricky posted.. So..being that I live in Albany, NY and it's certainly on the way to the Cape(Hyannis). I started sending private messages on facebook to contact Ricky and Justin.

Here's a little back story. Three weeks ago, my sister and I went to another taping of The Quilt Show, in Boulder CO. Had fun, laughed, got inspired, won prizes for coming the furthest, gave a pirate themed present to Alex. Heard ALL about Lady Gaga...So, I feel as though I have a true connection with Ricky & Justin.. at this point so what could be "funner" than being involved with this drive-by?

So, after many messages I finally convinced them to NOT follow the route that their GPS had told them to go - that my way was a bit quicker. By this time they were closer than I thought.

I had to get back in my Jeep and get to the overpass on Elliott Road. I kept hitting traffic lights and slow traffic. I was thinking that I wouldn't get there in time - BUT I did! I only had to wait about 5 minutes. I could see pretty far down the highway, and then I saw them coming with lights a-flashing.They didn't really slow down...but I saw Justin waving form the window. Nice rig guys!

I didn't have my camera with me because I thought I might drop it, since I was holding the quilt. The experience was awesome. I know it doesn't sound too exciting...BUT..if you are anywhere near their travel route, get out there, wave and get your own drive-by quilting! It goes to show you how SMALL this world really is.

This is my first bed quilt that I made after doing a few art quilts. The corners have applique stars. The stripes along the quilt are all3x6 rectangles of Red/Blue/Greens/Yellows/Purples/Oranges AND the middle row are all STAR fabrics. It was a way to use ALOT of my treasured stash. Simple, yet, time consuming. I had to get emergency swatches from my sister to have each row the same amount. (20 x 7) - that's 140 different fabrics. Oh..some are also from clothes/things my mom made us as little girls. So, it is also a Memory Quilt of sorts - for me at least.

Have I gone on long enough about this DRIVE-By event? Ricky gave me a call later to talk about the experience. Crazy as it was. It will be in my soul for a long time. Whoo Hoo!!! He told me I would talking about it for the next 10 years. I think he's right. 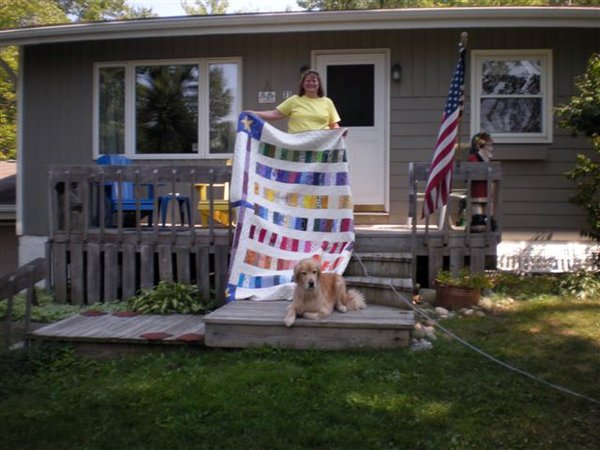