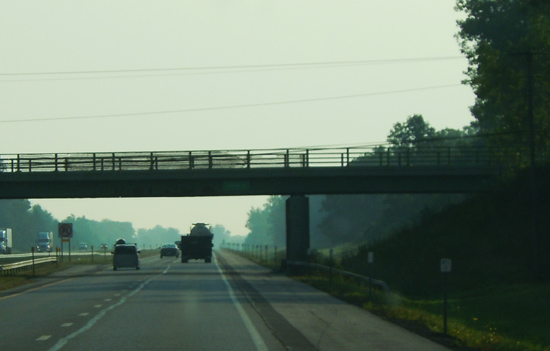 Karen Goddard from Lancaster, NY and her friend Jean Schultz near Albany (Depew, actually) really tried hard but became our first "drive-by misfire". This was meant to be the first of two drive-by quiltings that were back to back - literally. This overpass was the immediate one before the one with Penny Marble (see her above). Karen and Jean we're driving like bats out of hell (but safely of course) and just couldn't get there on time before we blew by. My photo above was taken in honor of their valiant effort. I asked for their story and photos of them and their quilts. Check it out below.

Sorry we missed you Ricky and Justin! I heard about the drive-by Quiltings a few days ago on Facebook and the The Quilt Show site and was thrilled to hear you were passing through Buffalo. I live just east of there thought it would be great to do this.

I got up early this morning and messaged Ricky on facebook, but didn't get his reply right away. Facebook was giving me trouble. By the time Ricky got my phone number and called me, he was pretty close and I didn't think I would make it in time, but I tried anyways only to be stopped by a train at a railroad crossing!

My friend Jean joined the chase but Ricky and Justin passed by about 5 minutes before we got to the overpass! Jean and I took pictures there anyways and had a good laugh about it all! Hope you come back this way! Ricky you made my day just talking to you on the phone!!! 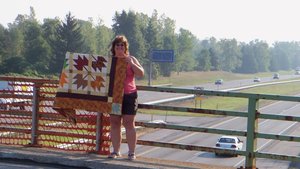 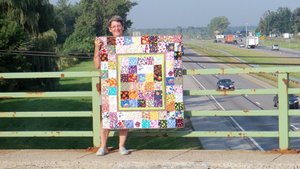