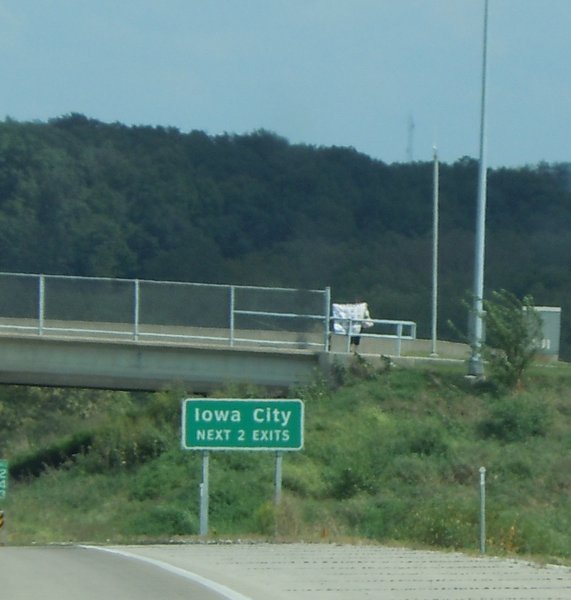 En route to our seminar in Hyannis, MA. Kathyl Jogerst will forever be the first "drive-by quilting" on the overpass at mile marker 242 in Iowa City, Iowa. Kathyl had a new grandbaby the night before this photo was taken.

It was a dark and stormy night. Well, no, actually it was a bright, sunny and windy Sunday afternoon. And I had a lot of nervous energy due to the excitement of our first grandchild being born the night before in far away New York City. As a member of The Quilt Show and a follower of Ricky on Facebook, I knew about the cross country trek Ricky and Justin were embarking on that weekend.

I had left a message for him to wave as he passed exit 242 in Coralville, Iowa as that is near my house. That's when he said to wave a quilt at him as he drove through town and he was giving updates as to his location. Hummmmm  that could be fun. No, how in the heck am I going to stand on the interstate and wave a quilt? However, I do need to go to the grocery store and Ricky is getting pretty close, so maybe I'll just see if it would work out. And I'll throw a small quilt top in the car....just in case.

As I drove over the over pass, I realize there is no place to park and I'd have to back track to park. Should I?  OK, why not?  So I park at a nearby hotel and cut across the lawn to get to the over pass. Uh oh.....I just saw a vehicle go by on the interstate and it was pulling a trailer!  Did I miss them?? No....I don't think it was a Hummer and I'm pretty sure that's what they would be driving. So I keep walking over the over pass with cars buzzing by and my little quilt top flopping in the breeze.

I found a spot to stand where I would be visible if anyone was looking. After 5 to 10 minutes, I'd decided I'd give it another couple minutes then head out....I probably was too late. About that time, in the distance I saw a distinctive vehicle profile pulling a trailer. It's them!

As I furiously waved my quilt top, the lights on the vehicle in question came on and were flashing at me!! Wooo Hooo! The vehicle slowed a little bit and as they drove by, Ricky was hanging out the window, taking pictures and waving. I'm pretty sure I even heard a "Wooo Hooo!".

Well, that was certainly fun, I thought as I walked back to my car. Wait until I tell my friends at my small group. They'll think I've really lost my marbles. A few days later at my small group meeting, my friend, Sugar, said she saw me on the over pass a few days earlier and hoped I didn't have car trouble, but it was very busy and there was no place for her to stop and check on me!!! They couldn't believe the real story and hooted when I showed them the picture Ricky took!

Most of my finished quilts were hanging in an exhibit downtown, so I chose a recently completed top to wave. It seemed appropriate however, since it is a pattern by Alex and made with the GO! cutter endorsed by Ricky and Alex. Let's keep it in the family! Even more appropriate since I was the winner of a trip to a taping of "The Quilt Show" sponsored by Accuquilt! It's a small quilting world and I'm so happy to be a small part of it. 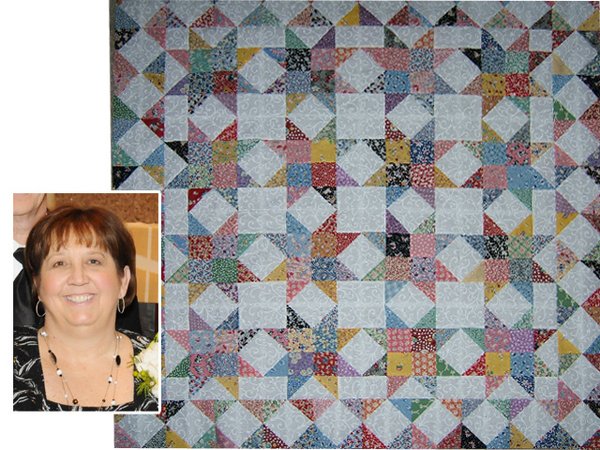